Introduction
Trenchard Street multi-storey car park is a reinforced concrete frame structure owned and operated by Bristol City Council in which some portions of cantilever slabs required strengthening. Since the slab surface was directly trafficked, conventional surface-mounted plate bonding could not be used and therefore ‘near surface mounted’ (NSM) reinforcement, in which bars are bonded into chases in the concrete surface was designed and installed.

Type of structure
An eleven-storey reinforced concrete multi-storey car park built in 1966. The structure has downstand beams on a regular column arrangement with longitudinal grid spacing of 7.5m and transverse spacing of 10.9m. The structure has approximately 3m cantilevers on all edges. The slab has a thickness of 225mm, which tapers to 150mm at the edges of the cantilever. Inspection and assessment identified several defects, including very variable cover in the slabs. In several cantilevers excessive cover to the top tensile steel resulted in significantly reduced moment capacity and parts of the slab had been withdrawn from use, resulting in loss of revenue to the operator.

Design conditions
Live loading is predominantly from cars with intensity for analysis 2.5 kN/m2. No special environmental conditions were noted. Since the top surface of the cantilever slabs required strengthening any retrofit had to consider that vehicles run directly on the surface. This eliminated surface bonded techniques and hence near surface mounted technique was identified as a preferred option early in the consideration of the structure.

Initial testing and investigation
Inspection, loading calculation and assessment of the structure had already been carried out by others. This identified regions of cantilever where strength was insufficient.
A more detailed survey was undertaken to confirm suitability of the concrete substrate and identify any regions that required repair to the concrete. A cover meter survey with isolated breaking-out to expose bars was completed to confirm existing reinforcement size, spacing and location in all deficient areas. These surveys confirmed that the concrete was sound, and the reinforcement was in good condition. Number and size of bars were as the record drawings, but cover was up to 105mm (in the 225mm slab) and very variable.

Material selection
Having identified the benefits of an NSM strengthening scheme, material selection was limited by availability on the market of suitable bars. The material adopted was MBT ‘Galileo’ bar, with nominal properties:
Young’s modulus – 130 kN/mm2
Ultimate tensile Capacity 2300 N/mm2
Ultimate tensile strain 0.0126
Fibre type carbon
Resin matrix type epoxy
Diameter of bar 7.5 mm
Surface treatment peel-ply
This material would be classified as NSM/1/C under the proposed scheme.
The bonding adhesive selected was an MBT epoxy recommended by the manufacturer for use with this bar.

Partial factors
Although the first edition of Concrete Society report TR55 has limited information on NSM reinforcement schemes, the factors used in the design were taken from this report, since bar production uses materials and methods similar to that for surface mounted strips:
Material factor (carbon) 1.4
Young’s modulus 1.1
Method of manufacture 1.1

Design calculations
Design for strength and stiffness was completed in accordance with TR55 recommendations for surface-mounted strips, with appropriate allowance for the location of the bars within the section rather than outside the surface.
Anchorage and curtailment of the bars was calculated in similar manner to that described in TR55 for surface mounted strips, but with additional factors of safety introduced to reflect the difficulty of surface preparation within chases and the lesser level of experience with NSM reinforcement.
The second edition of TR55, which has been published since this project was completed provides more detail of NSM design criteria and in particular provides alternative anchorage design criteria. Compared to the method described in the second edition of TR55, the anchorage design on this project was very conservative.
The resulting design generally required 7.5mm diameter bars in 20mm square chases at 250mm centres across the slab. Isolated regions with significantly better or worse existing reinforcement positioning had slightly different strengthening applied.

Design conformance checks
Since the input data were all selected from manufactures data sheets dimensions, material properties are satisfied once the loading requirements are met. Maximum stress and strain limits are all satisfactory as they are checked as part of the deign process. The level of strengthening is also achieved given that it is one of the input parameters.
The spacing, length and location of the additional bars were all considered realistic and able to be installed on the structure.

Prepare specification
The specification for installation was developed from that used for CFRP strips surface mounted on concrete substrates. Additional requirements were added with respect to the forming and preparation of the grooves for bars, particularly ensuring that the method adopted did not damage the parent concrete or risk damage to existing metallic reinforcement in the structure while still ensuring that the surface was suitable to receive the epoxy bonding adhesive.

Specific material selection
Due to the innovative nature of the technique at the time, the specific material to be used in the scheme was defined at Step 4 in consultation with the contractor and possible material suppliers. The specific parameters for the CFRP bars were then used in the design calculations, so this step is not applicable to this structure.

Method Statement for application of reinforcement
A Method Statement was produced by the contractor Matrix Solutions (formerly Connaught Parking Services) and approved by the client, following comments by the designer (TGP).

Site activities prior to installation
The FRP strengthening was one part of wider repair and enhancement of the structure (including enhanced lighting, painting, and modification of traffic flows in and out). Consequently, site mobilisation was already complete, with the contractor having established a compound and office space in adjacent disused retail premises.

Application of composite materials system
Installation was strictly in accordance with the approved method statement – chases were vacuumed, primer applied and allowed to become tacky, the chases part filled with adhesive, bars pressed into the adhesive, then the chases fully filled with further adhesive, taking care not to trap large air-bubbles between the adhesive layers. The contractor adopted refillable injection guns (as used for mastic application) to permit controlled and tidy dispensing of the adhesive in the precise quantity and location required.
As for surface preparation, TGP (the designer) witnessed the initial bar installation, after which the contractor completed their own QA processes with occasional inspections by the client.

Final QA checks, inspection and approval
Due to the uniqueness of this project at the time of the works (the first application of NSM fibre-composite reinforcement in the UK), the strengthening scheme was subjected to load-test before and after strengthening. Two bays of cantilever slab were progressively loaded to 1.25 times service loading using large water-bags while monitoring deflections in several locations along the cantilever tip in the loaded and adjacent bays.
TGP produced the specification and method statement for the load test. The method statement gave details with regards to objective of the test, personnel involved, equipment, sequence of testing, load levels, appropriate measurements to be taken, safety issues, responsibilities of parties involved, and criteria for prematurely halting the test in case of any deviation from anticipated behaviour by the structure.
Matrix Solutions carried out the test under supervision by TGP, the load being progressively applied then removed over the course of 10 hours.
Acceptance criteria for the strengthening were previously defined in terms of absolute value of deflections under service load measured at tip of cantilever and a demonstrated increase in the stiffness of the structure, which was taken to indicate that the applied strengthening was carrying load. The results show that the stiffness under service loading increased by around 30%. 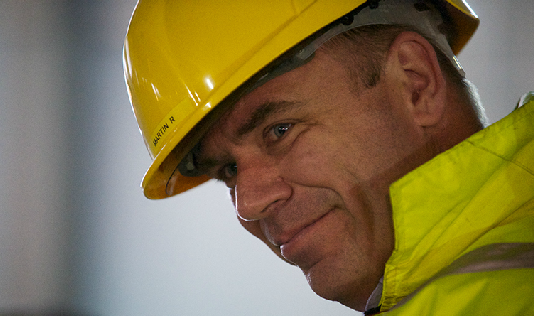